If you’ve been a puzzle fan for a while, you might have grown more interested in the history of jigsaw puzzles. Right?

Well, I did too. I researched and researched.. and then wrote this little piece on jigsaw history that I hope you’ll enjoy. We’ll look into who invented jigsaw puzzles and everything that followed.

A lot of the following info comes from the ultimate jigsaw puzzle legend, a puzzle historian Anne D. Williams. She is actually the real Jigsaw Puzzle Queen. I’ll hand over my crown to her if she ever asks. 😃

She wrote this book:

The last edition is from 2004. This book is practically the bible of jigsaw puzzle history.

If you don’t feel like reading a whole book on the topic, let me take you on a ride through the 250 years-long jigsaw puzzles history:

The invention of the first puzzles

So who invented the jigsaw puzzle? Some say Archimedes, the famous Greek mathematician who lived in 250 BC, was the first who came up with the idea of a puzzle. He is known for cutting a square into 14 pieces to try to assemble them in different ways.

The more realistic beginnings of jigsaw puzzles are connected to teaching geography to affluent children. A London-based mapmaker John Spilsbury is the one who invented jigsaws, as we know them today. In the 1760s he cut a mahogany board into pieces by national borders, using a handheld fretsaw.

So the first puzzle pieces were in the shape of countries. It is said that even the children of the British Royal Family played with ‘dissected maps’, a unique educational tool of the time. King George III. was a big advocate of dissected maps and even had a large cabinet made specifically for the storage of the many maps used to teach his children.

In 1891, Ravensburger, as the only puzzle brand still in existence today, made their first puzzle eight years after the company was founded. The wooden puzzle called simply “Geographical Puzzle” followed Spilsbury’s lead and taught children about geography.

A hobby for adults emerges

In the early 1900s, even adults started to solve puzzles, this time on both shores of the Atlantic Ocean. Yes – the puzzles made their way to the United States.

Only in the early 20th century, the game company Parker Brothers came up with the invention of the fully interlocking pieces. Until then, the pieces didn’t hold together as well. Some were so loose that any sneeze could wreak havoc on your work.

However, I did find examples of a New York map puzzle made in 1880, which was made of interlocking pieces of some form. You can see the image here. Apparently, back then it was common to have the edge pieces interlock so that they’d hold a fixed frame. The middle pieces were often cut more simply.

Today’s cardboard puzzles die-cutting technology comes from 1950 and hasn’t been modified since. What still keeps getting upgrades is the printing, the finish of the surface, and the quality of the cardboard.

The term jigsaw started to be used in 1880 when a special saw, which allowed easier cutting of the puzzles, was invented. It was called a jigsaw, but it was a foot-operated treadle saw, also known as a scroll saw. Today’s jig-saw is something quite different.

The first puzzles were made of hardwood such as mahogany or cedar. In the 19th century, plywood started to become more prevalent.

Cardboard came around in the early 20th century but didn’t catch on at first. With a shortage of wood to use for plywood at the beginning of the Second World War, cardboard started to be used more and more.

This type of material could be die-cut and the laborious process of sawing could be eliminated. In the early 1930s, for the first time, the die-cutting technique allowed easy manufacturing of puzzles with up to a thousand pieces.

Wooden puzzles never fully went out of business. They are still produced today, as a more high-end version of the ‘ordinary’ jigsaw puzzle. The most modern cutting techniques include laser cutting and the use of water jets.

As people quickly learned during the harsh times of the Great Depression (1929 – 1933), jigsaw puzzles provide a wonderful pastime that greatly helps to alleviate stress in your life. (More on jigsaw puzzle benefits here.)

The time also played in favor of the entrepreneurial minds and those who were seeking new ways of employment after being laid off during the Great Depression. Many people would buy a cheap scroll saw and make puzzles to sell.

Renting puzzles became a thing during that time too. Libraries and drugstores would rent puzzles out and charge per day.

Puzzles had also become so widespread because they were given away for free! In 1931, a creative New York businessman started giving away promotional puzzles with the purchase of a toothbrush. The practice caught on and the cheaply made puzzles would serve as great promotional material.

Only a year later, another fun idea emerged and hooked even more people: the ‘Jig of the Week’. A new weekly puzzle would appear at newsstands on Wednesday featuring a cheaply made die-cut puzzle. People went wild for them and challenged their friends over who would solve the current one first. Other weekly puzzles quickly followed. Quite a good way to get out of the Great Depression, if you ask me.

As Anne Williams claims, 30 million American households would assemble 10 million jigsaw puzzles every week – those were the peak numbers.

Old footage I saw showed people walking outside with puzzle holders hanging around their neck and solving while walking! Bumping into someone would mean your whole work was ruined and perhaps you even lost a few pieces. Still, I might need that genius invention for my walks. 😉

As I’m writing this article in 2020, the analogy with the Great Depression cannot be any starker. Since the 1930s, there’s never been another jigsaw puzzle boom – until now. Jigsaw history is being added to greatly once again.

Let me know what your thoughts are about the history of jigsaw puzzles and whether you’ve been a longtime fan or have only recently discovered your enthusiasm for puzzles. I reply to every comment!

5 thoughts on “History of Jigsaw Puzzles: How Did It All Begin?” 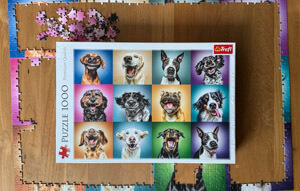 JigsawPuzzleQueen.com is a participant in various affiliate programs including the Amazon Services LLC Associates Program, an affiliate advertising program designed to provide a means for us to earn fees by linking to Amazon.com and affiliated sites. Readers clicking on any affiliate links for more information or to purchase products we recommend through these links may earn us a small commission.
Read more in our Privacy Policy.